Herb has been teaching music at NWMS for 6 years and he loves it. His students are great. He finds that each aspiring musician is unique unto themselves, and he adjusts their lessons accordingly. He finds studying and playing a musical instrument to be a joyous experience and he tries to create an atmosphere that allows the learning that takes place to be just that. Herb has a Bachelor of Science Music Education Degree from C.U.N.Y.
Jonathan Stern

Pete Scholes has been playing guitar for over 20 years. He briefly studied with Westchester, NY legends, Rich Dashnaw and Lou Ubriaco, but is otherwise self-taught. A diverse interest in music led him to perform in several groups, from rock to jazz, as well as pit-orchestras for live theater. For the past 11 years, Pete has been encouraging his students to discover and pursue their own path with the guitar, while guiding them to develop a keen knowledge of proper technique and music theory. His band, Take One Car, has been together for 9 years and they continue to release albums and tour the country.

Bob Renino is a freelance bassist and music teacher who has lived and worked in the NYC metro area for the past 25 years. He studied with jazz bassist Richard Davis, and also attended and graduated the Juilliard School of Music. After playing at resorts, hotels, and clubs, he began playing Broadway shows both as a substitute and a regular player. Bob has played in nearly fifty musicals in Broadway theatres and has held the “chair” in some hits such as “Ragtime”, “The Producers”, and the latest being “Honeymoon in Vegas”. He also performs with the New York Pops Orchestra, and the Hudson Valley Philharmonic. He has done much performing and recording work in NYC with many vocalists, and has also played on popular TV shows like “Good Morning America,” “Regis and Kelly” and “David Letterman.” He is currently married to singer/actress Sally Mayes and lives and teaches in Westchester County, NY.

Travis Carpenter is a graduate of the Crane School of Music at SUNY Potsdam, where he earned a Bachelor’s of Music in Music Education and a Performance Certificate in Viola. In addition to his experience teaching private lessons in violin, viola, cello, bass, and banjo, he taught school orchestra from 2007-2012 in Whitesboro, NY, conducting rehearsals and teaching group lessons to students in grades 4-8. He has played with the Utica Symphony, Catskill Symphony, Crane Symphony Orchestra, University of Vermont Orchestra, Burlington (VT) Civic Symphony, and ME2/orchestra. He also served as the Resident Life Director for the Green Mountain Chamber Music Festival in 2012 and 2013.

Travis’ musical focus is on community organizations, and he has served in several roles for groups that provide opportunities for amateur musicians. While living in Burlington, VT in 2012 and 2013, he played with the ME2/orchestra, which focuses on raising awareness for mental illness and removing the stigma associated with it. He led some rehearsals and also arranged several pieces for the group. He has also served in various support roles for the Vermont Youth Orchestra Association, which he was a member of during grades 6-12. While living in Ithaca, NY from 2013 to 2016, he served as assistant conductor and publicity manager for the Ithaca Community Orchestra, conducting a portion of each concert, writing press releases, and arranging for radio interviews.

In addition to his classical background, Travis also enjoys folk music, especially playing fiddle and banjo the old-time style. He has participated in recurring jam sessions in Burlington, VT, Ithaca, NY, and Yorktown, NY, and has also attended the Falling Waters Music Camp and Winter Village Bluegrass Festival in Ithaca. He has arranged several popular songs for middle school string orchestra, and enjoys adapting music to fit the skill levels of students of various ages. 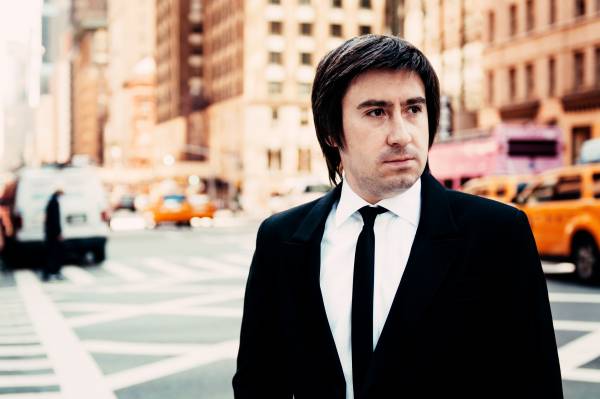 In 2013 EMI Classics released Tadeusz Domanowski’s first solo album „Tadeusz Domanowski – piano”, which includes works by Scarlatti, Schumann, Liszt, Prokofiev and virtuoso transcriptions by Vladimir Horowitz. The album received excellent reviews from critics: „Whoever likes great piano music and virtuosity will not be disappointed after listening to Domanowski. A splendid debut!” (Stanislaw Dybowski), „His future career of a virtuoso is certain, the instrument sounds beautiful in his hands, in a rounded tone, the lightness and proficiency of difficult parts inspires jealousy, not only recognition.” (Kacper Miklaszewski).
Over the past two decades Domanowski toured extensively as soloist throughout Europe, America and Asia, performing in such prestigious venues as Weill Recital Hall at Carnegie Hall, Warsaw Philharmonic Hall, and Lutosławski Concert Hall at the Polish Radio, Vilnius Philharmonic Hall, and Musikhalle in Hamburg.

His discography includes solo album „Tadeusz Domanowski – piano” recorded for EMI classisc, „Harmony of he Struggle” which includes a world premiere recording of Piano Concerto by Marcin Błażewicz, who dedicated the work to Tadeusz Domanowski and his recent album „Eugeniusz Morawski Songs” with complete songs by Eugeniusz Morawski, recorded with mezzosoprano Agnieszka Rehlis. The album received a nomination for Fryderyk 2015 – award of the Polish Society of the Phonographic Industry.

Tadeusz Domanowski has also an active interest in education. He has been appointed as a faculty member of Frederic Chopin University in Warsaw, where he taught piano in the years of 2011 – 2013. After coming to the United States in 2013, he served as an Adjuct Faculty at New York University where he taught piano class. Currently he teaches piano at Music Education Center in Brooklyn and also serves as a pianist at Precollege Division of Manhattan School of Music. He also gave numerous piano and chamber music master classes in Poland and in the United States.

Nara Simonyan has been teaching piano for 30 years. Nara is originally from Yerevan, Armenia. She started playing the piano at the age of eight. After seven years of intense studies at one of the leading Music Schools in Armenia, she continued mastering the piano at the Music Conservatory, graduated in 1988 and became a certified piano teacher and accompanist.
Nara taught at Music Schools in Armenia and Russia preparing students for various competitions and recitals. She believes that teaching to play the piano needs to include a number of important elements if a student is to flourish. It’s equally important to teach the foundations and techniques. Nara creates an atmosphere that is friendly, supportive and encourages each student to bring their personal passion, feelings and individuality into each piece they play.

Karen Longwell has taught both piano and voice for over 15 years. She studied piano with Wayne Leupold, and voice with Helen Boatwright. She graduated magna cum laude from Ithaca College with a B.A. in Theatre, and worked/lived in Manhattan for 23 years. She performed on Broadway, Radio City, national tours and concert tours. She’s performed everything from Cats to The Marriage of Figaro. Her voice students have gone on to study music on the college level. She has also taught piano and directed theatre productions at summer arts camps: Harvey Cavalier Camp and Camp Nabby. Karen’s church work spans 15 years of working with children’s choirs, adult choirs and cantors. Presently she’s the music director at Yorktown United Methodist Church and directs both a praise band and a traditional choir. Karen is married to actor Richard L. Smith and has 2 grown children who are also in the musical arts. Her website is www.karenlongwell.com.